Coming out of lockdown in Bangalore 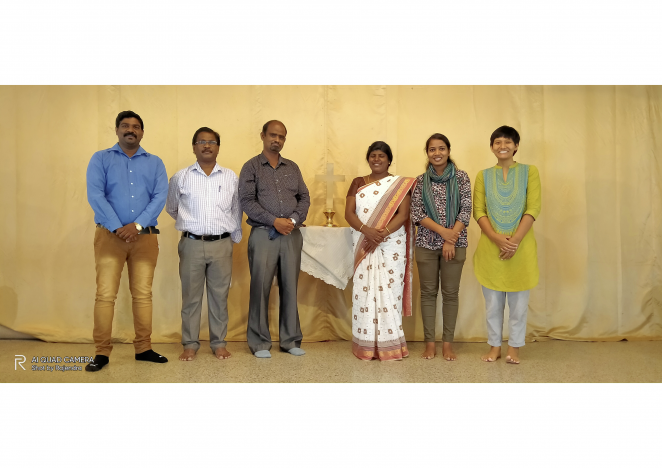 THE UNLOCKING of the 10-week long lockdown began on 8 June. Last week revealed signs of hope and continuing challenges. Most of the migrants from the central and northern states of India have returned to their home states.

Our State officials finally began ensuring trains, food and water to the travellers. Groups of young volunteers (pictured) from different faith backgrounds monitored the migrants departing at the railway stations and bus terminals and ensured they were adequately provided for as they began their journeys. We surveyed those who had lost their jobs and found they were construction workers, domestic help and in the cleaning industry. Most are returning to work this week. Our fear of large-scale unemployment among these daily wage earners and low wage employees is alleviated to a significant extent. We are also encouraged that those who ran roadside vegetable, food and other stalls returned back to their micro enterprises.

These are all women who show creativity, enterprise and resilience. The signs of hope we notice are in the attitudes and actions of the people who are finding ways to earn and care for their families. More groups, particularly Christian groups from within our State, are also working with migrant groups who are returning. They share their concerns and involvement through WhatsApp groups incessantly.

A few pastors are among them. I am concerned that some keep asking when they can share the gospel, suggesting that their main concern is evangelism. This is likely to invite opposition from people from the majority faith in our area. Some of the most vulnerable continue to be motorised (auto) rickshaw drivers. A large number live in our part of Bangalore with its affordable rents for low income families. They live on their daily earnings, which have reduced by 60-70 per cent. We are finding ways to support them with school fees and a meal for their children. Restaurants and hotels will open with a few services.

Those who worked in this sector as daily wage/low-paid labour will still struggle to find employment. Poor and low-income families have many needs. Colleen and I tend to focus exclusively on our service to them. We do not address the needs of the middle class and those comfortably well off. In the past three weeks I became very aware of the needs of the elderly lonely.

We try to keep in touch with them by phone at least once a week. Some have no family in India and others have no family in Bangalore. They have been isolated in their homes for 10 weeks. A civil servant in his early 80s who retired from a very senior position in the country broke curfew, drove and came to see me in the late evening last week. He did not feel he could share his fears with his only son who lives in the United States. After an hour of conversation on the state of the country, a glass of wine and a prayer he left for his home.

I know more than 20 such people in Bangalore but cannot keep in touch with more than two. Bangalore continues to be the home for pensioners and few ministries address their needs. Our work of training pastors of growing independent churches among the Dalit people resumes this week. They have faced loss of income but their congregations have remained intact. They need advice and encouragement on how to minister to people who face much insecurity. Some will be part of the 30 million who economists suggest will fall back into abject poverty.

Since Easter I have been preaching about how Christ’s resurrection and ascension has elevated humanity into heaven and eternity. Yet some of our people now face the prospect of losing some of the human dignity they achieved in the past decade as they slide into poverty. They know they will have the fullest possible dignity when they reach heaven.

However, they need human dignity both in time and eternity: that is what we believe the Gospel promises and we strive for as we minister. New guidelines announced by the Government for churches restrict gatherings to less than 50 people. The suggested number is 25 and churches are encouraged to have services outdoors. Clergy should not administer bread and wine directly. The over-65s are discouraged from attending services. We are trying to find creative ways to follow the guidelines and also craft our meetings so that we can experience the fellowship the Holy Spirit makes possible.