More than 100 Church of South India (CSI) priests were reportedly infected with Covid-19 after they attended the annual retreat at Munnar last month. 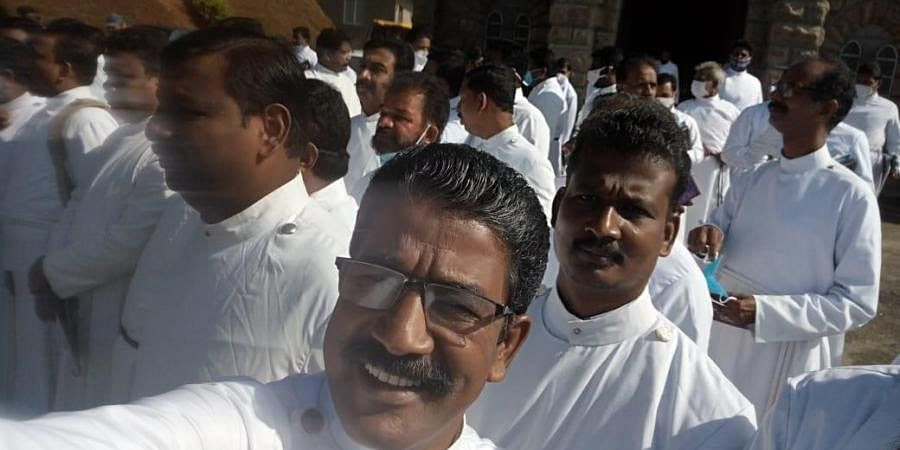 Priests at the retreat without facemasks and not maintaining social distancing.

THIRUVANANTHAPURAM: More than 100 Church of South India (CSI) priests were reportedly infected with Covid-19 after they attended the annual retreat at Munnar last month. Sadly, two of the priests have died and five others are said to be in a serious condition. Among the infected is CSI moderator and bishop of South Kerala diocese Rev A Dharmaraj Rasalam, who is in home quarantine. Sources in the church said the pandemic protocol was violated during the retreat.

The annual retreat, a conference of priests and community members, was held from April 13 to 17 at CSI Christ Church in Munnar. As many as 350 priests from various churches attended the meet. Sources said the retreat was held despite requests to postpone the event, and the priests were warned of disciplinary action if they failed to attend. The priests had travelled to Munnar from LMS Church in Thiruvananthapuram in a bus, sources said.

The deceased priests are Rev Bijumon, 52, and Rev Shine B Raj, 43. Bijumon, who was the vicar of CSI church, Kazhukode, near Vattappara, died last Thursday. Shine B Raj, who was the vicar of CSI church, Punnakkamugal, near Thirumala, breathed his last on Tuesday. His funeral was held later in the day.Many of the infected priests are under treatment at Dr Somervell CSI Medical College Hospital at Karakonam and some are in home treatment.

Hospital authorities refused to comment when contacted but a senior doctor, on condition of anonymity, said none of the infected priests are in a critical condition. “There were a few serious cases and they are recovered now,” he said.Jacob Mathew, secretary of Church of South India Trust Association and member of the Joint Christian Council, alleged that the retreat was organised ignoring the directions of the government and council.

“The annual retreats of Central Kerala diocese and Kochi diocese were also scheduled last month and they were postponed due to a surge in Covid cases. But CSI South Kerala held the retreat secretly at Munnar without informing the government. As per the government instructions, only 50 people are allowed in a conference. But here all safety guidelines went for a toss,” he alleged.

Jacob also shared the issue in a Facebook post. Though a group of social workers sent a complaint to Chief Secretary V P Joy a week ago, no action has been taken so far.Rev Dharmaraj refused to comment as he was in home quarantine. T T Praveen, secretary of South Kerala diocese of CSI, said the infection was not spread from the retreat. He said some vested interests are indulging in a negative campaign against the church.

“The retreat was organised adhering to protocol and we had got permission from the government. It is true that some of the priests have tested positive. But it has been proven that the infection was not spread from that conference. Two priests died due to the various diseases they had been suffering from. It is evident that it is the propaganda by anti-CSI lobbies to defame the Church, which is going to hold polls in the coming months,” he said.

A priest who attended the retreat and subsequently tested positive said at least 30 priests had been hospitalised.  “A few others have recovered and discharged,” he told TNIE. Thiruvananthapuram DMO K S Shinu said the health department could not take action as the conference was held last month and that too in Idukki. “We can’t do anything. It was held last month. The action had to be recommended and taken at that time if any violation was reported. Moreover, I can’t take action as the retreat was not held under my jurisdiction,” he said.

The priests did not follow any social distancing measures or use masks and sanitisers. An annual conference of Church Of South India (CSI) which violated COVID-19 protocol has turned into a superspreading event for the coronavirus. Around 110 priests belonging to the Church of South India (CSI) have been infected with the virus, and two priests have died after they attended the retreat that was held in April. The condition of five others is said to be serious.

Among the infected is CSI moderator and Bishop of South Kerala diocese Rev A Dharmaraj Rasalam. He is currently in home quarantine, Church sources revealed.

As many as 350 priests and deacons from various churches in Thiruvananthapuram attended the meet. The priests who passed away due to COVID-19 are Rev Bijumon (52) and Rev Shine B Raj. While the former was the Vicar of CSI Church Kazhukde in Thiruvananthapuram, the latter was the Vicar of CSI Church Punnakkamugal near Thirumala. Rev Shine B Raj was laid to rest on May 4 whereas Rev Bijumon passed away on April 29, say sources.

The annual event was held at the Munnar CSI retreat centre from April 13 to 17 and was attended by priests and deacons. After they returned home, many priests tested positive for the coronavirus and were under treatment in various hospitals at Thiruvananthapuram. A group of laity members submitted a complaint to the state Chief Secretary demanding action against the church organisers for the violation of COVID-19 protocol.

Speaking to TNM, Shem P Issac who was among those who submitted the complaint to the Chief Secretary, said that CSI moderator and Bishop of South Kerala Diocese Rev A Dharmaraj Rasalam had forced the priests to attend the retreat at Munnar.

“The priests and deacons from Thiruvananthapuram attended the retreat, and most of them are above 60 years old and many are diabetic patients. Some of the priests conveyed their unwillingness to attend the retreat to the Church authorities. But the Church officials threatened them to attend it,” he alleged.

“The retreat did not follow any COVID-19 protocol. The priests travelled in a bus from Thiruvananthapuram and did not follow social distancing. They did not use masks or sanitisers in the retreat,” Shem P Issac said.

“Many senior priests were under treatment and in critical condition in various hospitals in Thiruvananthapuram. The reality is that there is no action or democracy inside the CSI Church” he added.

However, the Idukki district administration has said that they didn’t get any information about the retreat.

I do not need to explain any further than the above secular newspaper (along with several others) has reported with a lot of respect to the Church. Just read the response from the Church official…..The CSI is sitting on a moral high ground all the time by putting the blame on others that someone is conducting a negative campaign to defame the church. They not only say such things to the public but they tell the court when there are mountains of complaints against the CSITA administration. From morning till night, the CSI administration lies, defrauds, conceals, blames…. There is No one to raise a finger at them……