My wife and I met Desmond Tutu in July 1994, three months after the historic elections which brought Nelson Mandela and the ANC to power in South Africa. We had arrived in the country at the beginning of that year, to begin service with the Diocese of St Mark the Evangelist[1], based in Polokwane (then called Pietersburg). 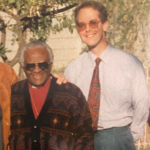 Desmond Tutu had become Archbishop of Cape Town in 1986, in the full glare of global publicity. He was already well-known[2] as the Nobel Laureate, a fearless and vociferous campaigner against the apartheid political system, but also as a man of God, an independent Christian voice, definitely not in the pocket of any party political agenda, against violence and abuse of power on all sides, talking about God and his love in the public square. He was at Nelson and Winnie Mandela’s side when the great leader was released from prison in 1990 (my wife claims that the two of us watching this historic event on a grainy black and white TV in England was our first date!) Desmond’s voice was often heard pleading for peace in the fractious and dangerous build-up to the first elections in which the majority were allowed to vote, in April 1994.

But Desmond was also leader of a denomination with well over a million affiliates. South Africa has a huge diversity of independent churches, but the ‘mainline’ groupings – Roman Catholic, Anglican, Methodist, Dutch Reformed and others – remain numerically strong. As part of his pastoral work, Desmond would visit Dioceses around the Province[3]. His tour of the Diocese of St Mark in July 1994 had been in the diary for some time.

Desmond and his wife Leah stayed with Bishop Philip Le Feuvre and his family. His press secretary, John Allan, stayed in our little bungalow not far away. When he first arrived at the Diocesan Centre for a lunch to meet the Bishop’s staff and local clergy, I remember one of the first things he did was to go through into the kitchen, to greet and comfort the recently widowed cook and housekeeper, Nikka Malebane, whom he remembered from a previous visit. This trait of seeking out the people others overlook, and showing a real interest in them and their lives, was repeated again and again as we observed him in the various functions around a Diocese which was a backwater, predominantly rural and poor, with around 12 full-time clergy caring for 165 congregations in an area the size of Wales.

Despite the febrile atmosphere of post-apartheid South Africa, he was at ease with the white people he met as well as with everyone else; with the affluent and powerful as well as the most disadvantaged. He did not resent the role my wife and I had just embarked on, as “missionaries” from a former colonial power. Rather he encouraged us in our work of empowering church leaders (mostly laity – the de facto leaders of congregations) in gospel ministry, community development and emergency relief work. He spoke to large crowds at churches around the Diocese. The day before his departure, after a final Communion service, a few of us retired to the Bishop’s house for the important business of watching TV. It was the first test match at Lord’s, the ‘home of cricket’ in London, between South Africa and England since the late 1960’s when the apartheid state was banned from most international sporting competition. Desmond was keen on cricket and other sport; he made knowledgable comments as well as joining in the general banter, in between sips of rum and coke.

Later that evening my wife and I were privileged to be part of small group dining at an Italian restaurant with Desmond and Leah. We knew that he was due to retire as Archbishop later that year. He confided to us that he had just received an invitation to play a leading part in the post-apartheid rebuilding process. This was to become the Truth and Reconciliation Commission of which he would be appointed Chairman in 1995. Desmond was actually discussing this openly across the table with Leah – “Dudu should I do this?” he asked, using his term of endearment which means something like “beetle”. “I was so looking forward to retirement”. Leah said “you know you have to do it – it’s your calling”. I felt at the time I was in the presence of history being made.

The next day they left early to catch a flight to London. We saw him on TV the day after – he was in a hospitality box watching the cricket live at Lord’s!

I disagreed with some of Desmond Tutu’s theology, but I admire him tremendously for his qualities as a human being and man of God. One of the challenges that liberation theology, and theological thinking from the majority world generally, has brought to affluent, biblically orthodox Christians from the 1960’s onwards, has been hard questions: “you might have correct theology but what are you actually doing? Are you and your message good news (or any sort of news) to the economically poor? Are you acting rightly (orthopraxy) as well as believing the right thing (orthodoxy)?” The current soul searching in some evangelical circles about abuse of power and creating leadership hierarchies based on privilege, and about the historic neglect of disadvantaged urban housing estates in mission priorities, are examples of how biblical principles neglected by those who claim to be bible-based are sometimes rediscovered by a challenge from non-evangelicals. Tutu’s life and witness challenged me as a young man to care for the poor and be concerned for justice across the world, even if these concerns were not typically shared by some in my church circles at home.

In my studies of the South African situation, both before I lived there and from observing in situ for nearly 13 years, I noticed that Christians responded in different ways to the pressure created by the apartheid system (which was in itself an attempted ‘solution’ to the issue of trying to forge a nation out of very diverse peoples and cultures). For me, it was obvious that enforced segregation and the suppression of the majority by the minority was wrong and shameful, while the Christian gospel remained the same in every context: the availability of forgiveness, relationship with God and eternal life for undeserving sinners through repentance and faith in Christ. But I found that for some church leaders in South Africa, the hope of political liberation, equality and democracy is the gospel. For others, the gospel is entirely spiritual, and so Christians should not be taken up with the way society is run, or people’s material welfare at all. A third group of Christians fully supported the apartheid system, believing that the alternative was godless communism.

These three standpoints are classic responses to a dominant and oppressive socio-cultural ideology, and we see the same responses today by Christians in relation to secularism and increasingly enforced ‘wokeness’ in contemporary Western culture. Some collude with it and even celebrate it like the white South African Christians who supported apartheid. Some try to pretend that such cultural and political issues have nothing to do with them as they focus on the work of ‘the gospel’ (defined in a narrow, church-based way). And then a third group embrace full political resistance and revolution as the practical outworking of their faith. Personally I think a more sound approach is to critique false ideologies and their effect on society and government, from a biblical perspective, to work peacefully for change, while at the same time affirming the need for personal salvation and transformation to holiness of life through Christ, and the work of the churches in making disciples of individuals and local community groups.

I believe, for what it’s worth, that Desmond Tutu got the first part right, lived and communicated it, perhaps as well as anyone in living memory. He looked at the man-made system in which he grew up, how it disfigured those made in the image of God and caused division and injustice where there should have been harmony; he felt outraged, and said, like Moses, “this is wrong and we can change”; like Martin Luther King he not only said it eloquently but also his personality became part of the message. He was passionately opposed to a bad ideology, but he did not hate those who agreed with it or even enforced it – in fact he loved them. He prayed, he spoke, and then he acted, often with amazing courage at the risk of his own life. He was not, as some believe, a secular socialist politician in a purple cassock. He was a Christian prophet, flawed like everyone, but ensuring that the new South Africa was not characterised by retribution towards apartheid perpetrators, also quick to warn against corruption in the ANC, always insisting that his values came from faith in God.

But I hope it’s not unfair to say that his understanding of sin and salvation deviated from the bible’s teaching. Desmond made no distinction between the inherent dignity and value of every human being made in the image of God, and the special status of those adopted as children of God, which according to the New Testament is not through privilege or merit but through faith in Christ alone. Desmond could not accept this – he saw the idea of separation of the saved and unsaved as a form of apartheid. For him, the love of God would conquer all – He would accept everyone in the end, especially the oppressed, even the unrepentant. For the same reason he supported LGBT ideology including same-sex marriage  (although at the request of his fellow bishops he did not promote this cause in Southern Africa while in office as Archbishop).

Desmond’s brand of liberalism is a superficially attractive theology especially when contrasted with a caricature of apartheid-supporting Calvinism in old South Africa, or some Western evangelicalism today which is sadly tinged with racism and lack of compassion for the poor. And Tutu’s universalist soteriology is completely understandable given his context. Valid points can be made about how a denial of God’s judgement against sin leads to much worse unintended injustices, but I would rather leave it there. Should Tutu be denounced for being a bad influence, even be blamed for the revisionism of contemporary Western Anglican leaders? I’m not sure we can do that. The capitulation of liberal Anglicanism to Western secularism has been going on for decades and would have continued without Tutu.

Perhaps we can say he may be held up as a hero by the Christian left, but they would do well to emulate his refusal to demonise (or threaten to imprison) those who think differently, his sense of perspective (apartheid South Africa was proper ‘institutional racism’), his humour, his prayerfulness. And while today’s Christian right may always write Tutu off, those moderate orthodox believers who tend to pietism can validly remain cautious about the salvation theology of his tradition, while learning from his immense courage,  the way he brought God and aspects of his character into the public square, and from his commitment to defending the weak and oppressed.  Meeting him and watching him in action was an immense privilege for which I will always be thankful.

[1] This region, in the far north of the country, had been carved out of the Diocese of Pretoria in 1987. Despite a predominant anglo-catholic churchmanship in the area inherited from the missionaries of Mirfield and USPG, and the main languages of the area being Northern Sotho and Afrikaans, the first Bishop to be appointed was an English-speaking evangelical, Oxford-educated Capetonian Philip Le Feuvre.

[2] Such a household name in the UK at the time that students referred to a lower second class degree (2:2) as a “Desmond”.

[3] The Anglican Church of Southern Africa includes other nations and jurisdictions: Lesotho, Swaziland, and St Helena. At the time it also included Mozambique and new mission work in Angola. Anglicans in these Portuguese-speaking countries have now formed a new Province.