MYANMAR CHURCH LEADER: ‘WE DO NOT KNOW HOW TO BE GOOD CITIZENS AFTER THIS COUP’ 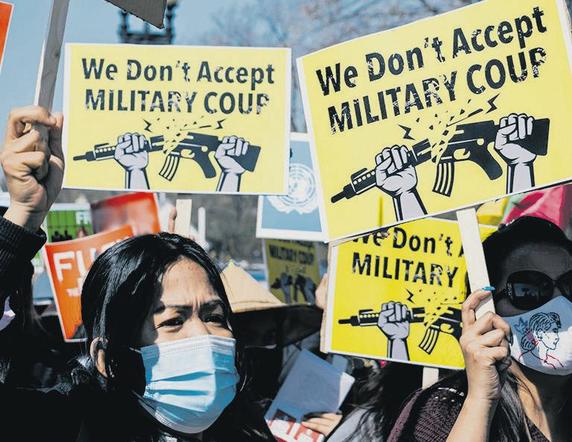 The following report comes direct from a senior Christian leader in Myanmar where four villages on the Thai border, each with a Christian community, face starvation because the border is closed due to Covid. Other Christian communities are helping them by giving them rice, cooking oil, salt, etc.:

Protesters over the military coup | photo: Gayatri Malhotra on Unsplas

We do not know how to be good citizens and Christians in Myanmar in this difficult time. To obey the military government, or to stand with the people who are anti-government?

Christians in Myanmar are not persecuted by the military government, but are facing the decision whether to obey or disobey their orders. Some of them disobey because they say ‘this military government’ is not real government. They say: ‘All top leaders in the military government are the greatest robbers and thieves in the world. So we do not need to obey any orders they issue.’ But other Christians say: ‘All authorities come from God. So if God did not allow them they could not carry out the coup. We do not know how God will give us lessons to learn from this event.’

The people arrested and detained or put under house arrest were the leaders of the National League for Democracy party who won a landslide victory in the general election on 8 November 2020. Most of the leaders of this party were arrested.

Government workers have formed the Civil Disobedience Movement (CDM) and do not go to work. They stand with the people who carry out boycotts in many parts of the country. The military and the police shoot them with real bullets. Over 200 people have died including a girl who was only seven years old. She did not go to the streets. This girl stayed at home and the police came into the house, shot her, and she died.

As Christianity is a minority in Myanmar we have to be very careful in dealing with the government and the Buddhist zealots. The whole country is in turmoil or chaos.

From Friday April 2 the government is shutting down the internet altogether. Our phones may still work.

The military government has carried out air strikes on Karen villages. People are fleeing to the Thailand side of the border but are being returned by the Thai authorities who have set up barbed wire fences at the border points. I do not know why Thailand will not accept our refugees.

Eight to ten people die every day in the protests. Real bullets are used. The government will not change its position, so every protester will be killed or detained.

We have a military terrorist government. They are looting the people. When people in cars or motorbikes are checked on the roads, if the army see money or phones in the vehicle, they just steal them.

Pastors and Christian leaders are not involved in the protests. If we were to do so we would be arrested and jailed. People are afraid that if they go out the army will arrest them.

We were able to meet for Easter Services, in groups of up to 30. The Intelligence Service will be checking that these numbers are not exceeded.

My Easter message was that people should pray for the government and the population. The protesters are mostly younger people between 17 and 45. Older people do not take part since unlike the young they cannot run away. So they pray for their sons and daughters out on the road. They do not stop them from going out.

I ask people outside Myanmar to pray for this military government who have really become terrorists. They have no sympathy. They show no mercy to people. They use bulldozers to remove vehicles from the roads. Pray that God will soften their hearts.”